The trails near our rivers provide an easy and accessible way to enjoy fresh-air outdoor exercise, fishing, nature photography, scenic views and a commune with nature. Trails range from primitive and hard-packed dirt paths to wide-open paved thoroughfares. Trails are free of costs and can be used for jogging, walking, cycling, pushing baby strollers and walking pets (please clean up after your pets). Most trails are closed at night and shouldn’t be used when it is dark.

Use common sense and follow these trail rules for safe and fund outdoor recreation: 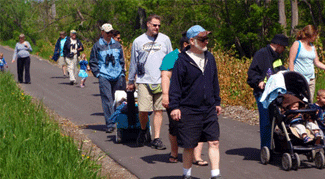 This 8.5-mile-long paved trail opened in 2013 and runs between Eldridge Park in Elmira and the Lowman Crossover in the Town of Ashland. The trail sits on the former Erie-Lackawanna Railroad bed. The western half of the trail is elevated over major roads (railroad overpasses) on Elmira’s Eastside and Northside and passes by residential, industrial and business sections of the city.

The trail is great for walking, jogging, cycling, pushing children in baby strollers, cross-country skiing and snowshoeing. The trail is mostly level with a slight decline as you travel east (downstream) and includes features benches and bike racks.

The Eastern section of the trail was home to a former railroad station in Elmira used by the Erie-Lackawanna Railroad that was used by the famed Phoebe Snow, a fancy passenger trail once   operated by the Delaware, Lackawanna and Western Railroad (DL&W) and, after a brief hiatus, the Erie Lackawanna Railway. Around 1900, DL&W launched a marketing campaign around the fictional character of Phoebe Snow to emphasize how the exhaust from its steam locomotives was cleaner than competitors' locomotives, as a result of using anthracite coal. The train took its name from the character.

The trail property is owned by the New York State Department of Transportation and occasionally used by New York State Electric & Gas vehicles to access high-tension power lines crossing the trail and river. The City of Elmira maintains the Western section of the trail and Chemung County maintains the Eastern section.
The Eastern section (begins at East Water Street in Elmira) runs along the Chemung River and passes through wooded areas and small meadows with gorgeous views of the river. The Interstate-86 four-lane highway parallels the trail and produces traffic noise. 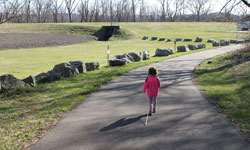 There are currently no restroom facilities on the trail, but there may be in the future. The trail includes mile markers painted on the pavement and hung on the fence on the Eastern section of the trail.

Plans include connecting the trail to the Catharine Valley Trail that runs between Seneca Lake in Watkins Glen to the Village of Horseheads, along Route 14.

Parking and Trail Access: Parking is available at Eldridge Park and the Elmira city-owned parking lot on East Water Street (across from Kennedy Valve). There is a tiny parking area for a few vehicles at the western end of the trail, with additional space in a parking lot across Interstate 86. 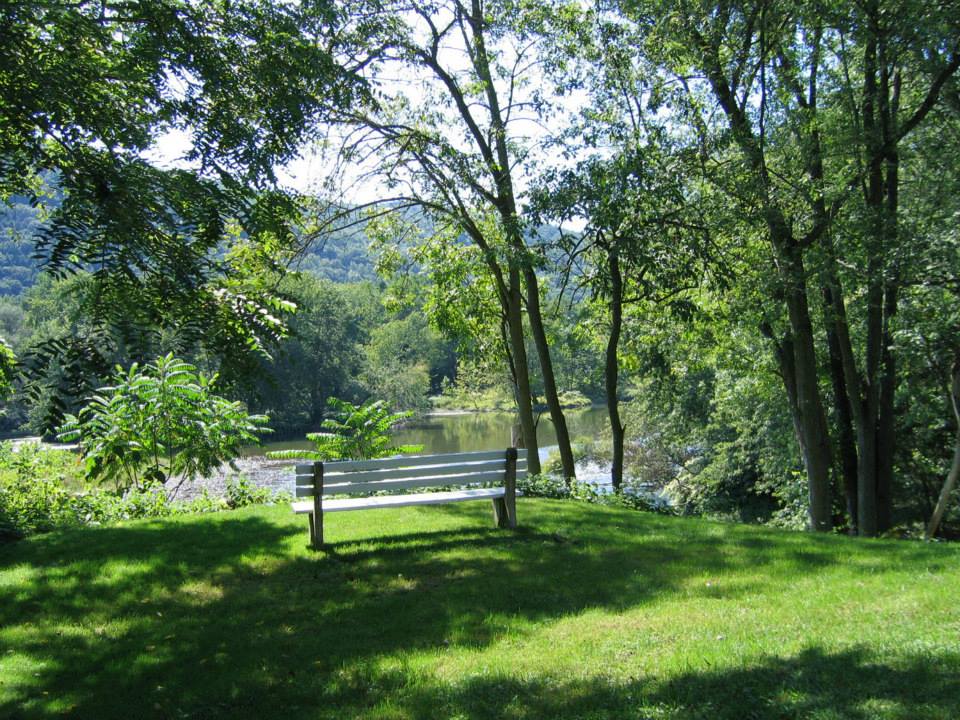 These nearly three-mile-long hard-packed dirt paths run through scenic and shaded wooded areas and wide-open meadows. The paths were not constructed but are the result of people walking over them for hundreds of years. The paths were used by Native Americans who settled villages along the river.

Today, the paths are popular for walking dogs, jogging, hiking, mountain-biking and cross-country skiing. The paths form a series of three parallel trails that follow the Chemung River. They provide spur trail access to beautiful grassy riverbanks and flatlands beneath shady willow trees along the river – great for fishing, nature photography or simply sitting and watching the river flow. The trails feature benches and two bench swings, installed by River Friends, that provide excellent scenic views of the river.

The paths cross hundreds of plots of land owned by the New York State Department of Environmental Conservation (DEC), municipalities and private landowners. The paths go between the Grove Street Boat Launch in Elmira and end near the Fitch’s Bridge Boat Launch in Big Flats.

The trails are narrow, with many knolls, bumps, tree roots and rain washouts. The trails are maintained by DEC, Chemung River Friends, municipalities and trail users.

Parking and Trail Access: Parking is available in a large lot behind the Elmira Town Hall, 1255 W. Water St. and the Grove Street Boat Launch (at the southern end of Grove Street, up and over the grass levee). More than a dozen streets in West Elmira dead-end at the grass flood levee that runs near the trail. There is parking for a few vehicles at each of these dead ends. 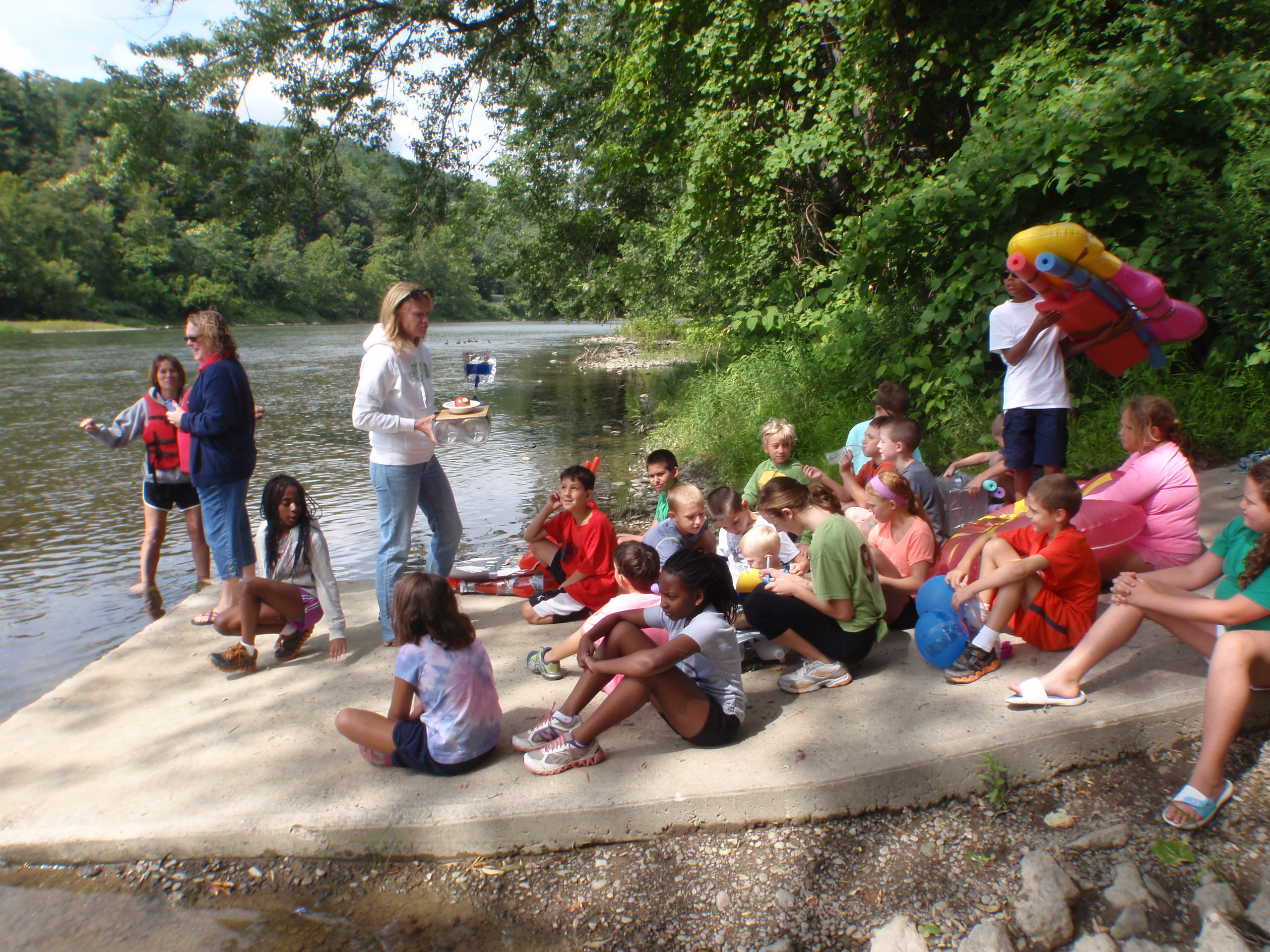 The .9-mile asphalt trail extends from Bradford County Veterans Memorial Park in Towanda, Pa., and runs along Merrill Parkway, before picking up residential sidewalks. This river walk boasts something for everyone -- parks, benches that overlook the Susquehanna River, river boat access points, and easy access to downtown businesses to visit along the way. Because the trail parallels the Susquehanna River, there is little elevation gain/loss, which makes this a perfect trail for families and young children. Walkers and hikers are welcome along the river walk, but there is no biking allowed on the trail. Bikers are encouraged to utilize Merrill Parkway, which runs on the inland side of the trail.

Parking and Trail Access: The Towanda River Walk is an easily accessible trail due to its proximity along Merrill Parkway. There are numerous access points along its .9-mile corridor and easily connect it to Main Street. Parking can be found at Bradford County Veterans Memorial Park, as well as on-street parking along Merrill Parkway.