Flooding is a fact of life in the Chemung Basin. Flash floods may occur quickly with little or no warning. Since the devastating flood caused by Tropical Storm Agnes in June of 1972, various government agencies and the Chemung Basin Flood Warning Service have made efforts to improve flood warnings and reduce the damages caused by flooding. 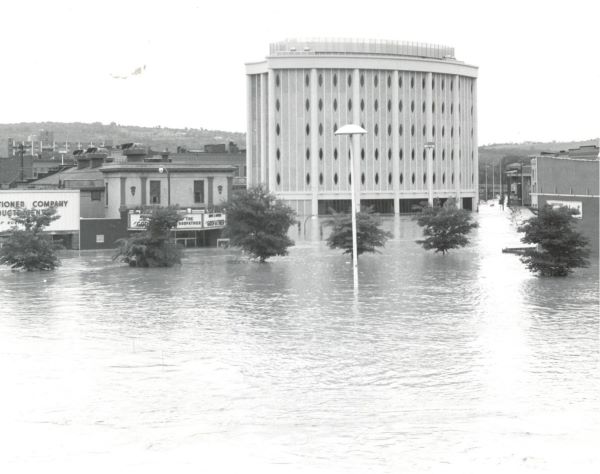 What is Your Flood Risk?

Contact your municipal government or County Planning Department to learn whether your property is located in the mapped floodplain. Many areas subject to flooding are not mapped as floodplain, so talk to your neighbors as well. Find out all that you can about the history of flooding in your area.

Protect Your Property from Flood Damage

Any improvements or new development should be located away from stream banks and built in compliance with floodplain development standards. If existing development is prone to flooding, consult with your municipal building official about flood-proofing techniques (such as elevating electrical equipment and utilities or installing a sewer backflow valve).

National Flood Insurance Program | Standard homeowners insurance policies DO NOT cover losses due to flooding. Federally subsidized flood insurance can be purchased for buildings and building contents located in and out of the mapped floodplain. Make sure that your flood insurance policy covers both the contents and structure of your home. (Policies required for a mortgage generally do not cover contents.)

Be Prepared for a Flood

Download the Flood Preparation Guide for Property Owners. For added information, buy your own NOAA weather radio to receive transmissions from the National Weather Service.

Flowing water is deceivingly powerful. The faster it flows, the more powerful it becomes. This is especially true in rain-risen rivers. They are dangerous.
That was the case on May 16, 2020, when four women launched their kayaks in the Chemung River at the Grove Street Boat Launch in Elmira. The river was high, fast, and muddy from heavy rains the day before.

The day was warm and sunny day. The river was fast and chilly. The kayakers had paddled this section of the river in the past. They were familiar with it. It’s usually a slow-moving deep stretch of river that can easily be paddled upstream due to the slow current.

But what beneath the water, the temperature of the water and the speed of the water that pose dangers. The water was coffee brown with mud and impossible to see below the surface.

The women paddled downstream beneath the Walnut Street Bridge. The fast current made paddling easy. About 150 yards downstream was the Chase-Hibbard Dam, a lethal obstruction to paddlers, as tons of foamy water roared over the top of the dam. Get too close to it, in high water, and the kayak will be pulled to and swept over the dam.

The paddlers decided to paddle back, against the current, to the boat launch. They quickly realized they current was too strong, as the river carried them closer to the dam.

Fortunately, a large island (Clinton Island) was between them and the dam. The women, who were all wearing life vests, paddled to the island, got out of their boats, and pulled them onto the island. Someone crossing the bridge saw the paddlers’ predicament and called 911. Firefighters arrived at the boat launch, unloaded their motorized rescue boats, safely retrieved the stranded paddlers and their kayaks and returned them to the boat launch.

“If the island had not been there, it is likely that the river would have pulled them over the dam,” Pfiffer said. “When that happens, in high water, a rescue mission becomes a body recover. If they had gone over the dam the kayaks and the paddlers would have been trapped in the swirling hydraulics, at the foot of the dam, that would pull them under and pop them up over and over like a washing machine. It’s too powerful to swim out of.”

A similar situation occurred at the Rockbottom Dam on the Susquehanna River in Binghamton in 1975 that claimed the life of a fire chief and fire captain attempting a rescue. The firefighters and their rescue boat were pulled into the hydraulics and overturned. You can watch a disturbing TV news video of the incident in the video at left (may be disturbing for some viewers) . It shows the power of fast water and the danger of dams.

That’s why Chemung River boaters need to be careful about paddling past the Walnut Street Bridge. The Chase-Hibbard dam keeps the upstream river level high enough for the Elmira Water Board to withdraw water from the river for its customers.

The lesson: high, muddy and rain-bloated rivers are dangerous. Stay off them unless you are an experienced paddler with the right equipment. The speedy current gives you little time to think and react to obstructions or dangers that exist unseen around a bend in the river. High water is often cold and can quickly lead to hypothermia if a paddler gets dumped.
Other high-water dangers:

River paddling can be extremely safe or extremely dangerous depending on the paddler’s knowledge, experience, and common sense. Most of the time it’s safe if you have basic paddling skill, know your limitations, and use common sense.

“The paddlers in Saturday’s incident made good choices in wearing life vests and getting on the island,” Pfiffer said. “But they were lucky the island was there and that they were able to paddle across the current to get to it.”

New signs are being installed on the Walnut Street Bridge in Elmira to warn Chemung River paddlers about the hazardous Chase-Hibbard low-head dam 1,000 yards downstream.

Each of the four, easy-to-see, 8-foot-by-4, aluminum signs read “Danger Dam Ahead” printed in white letters on a red background. The signs, purchased by the Chemung River Friends, will be installed on the four main sections of the side of the bridge facing upstream. 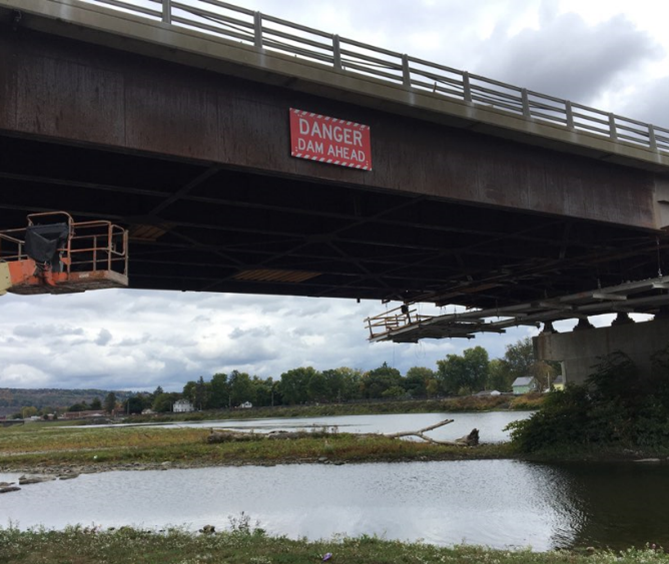 “The dam is nearly impossible to see when you are paddling downstream toward it,” said River Friends Executive Director Emily Marino. “If you don’t know that it is there, you and your kayak can easily be swept over the dam and trapped in a churning river hydraulic and drown.”

In the early 1970’s two Binghamton firefighters drowned after their boat was pulled into the dam’s swirling water overturning and trapping the men and the rescue boat in the powerful hydraulic.

River Friends purchased the signs following a Chemung River rescue this past summer when the river was high and fast. A group of several women paddled under the Walnut Street Bridge and were unable to paddle back upstream to escape the dam. Fortunately, they were able to paddle to an island above the dam and await rescue by the Elmira Fire Department before their boats were swept over the 8-foot-high dam.

A few weeks later a few paddlers in rubber rafts, at the Grove Street Boat Launch in Elmira, were about to paddle downstream toward the dam unaware of its location and danger. Fire officials who were training at the boat launch told the men about the dam and the group cancelled their trip.

Several years ago, River Friends and the City of Elmira, built the Don Hall portage on the Southside bank of the river adjacent to the dam. Paddlers can exit the river, above the dam, carry their boats up a set of steps and along a paved trail that leads to the water’s edge below the dam where it is safe to resume the paddle. 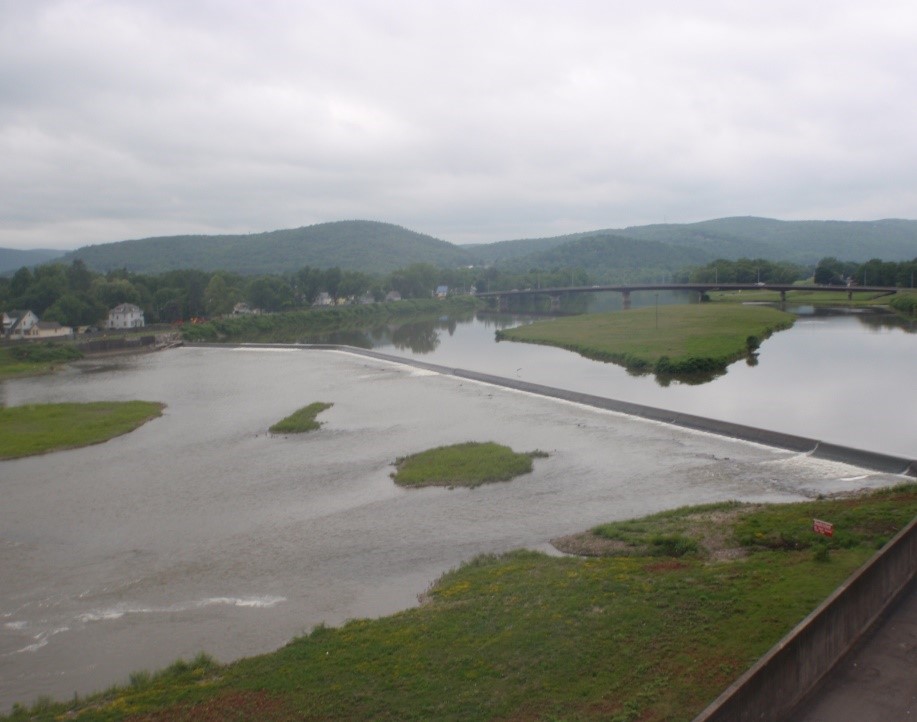 “The Grove Street Boat Launch is the most used launch on the river,” Marino said. “It’s part of our mission to improve river safety”.

The project was a partnership with Eastern Metal in Elmira, which manufactured the signs at a reduced price, and the Chemung County Department of Public Works which is installing the signs while the bridge is closed for renovations. The bridge is expected to reopen by the end of October.

The dam is owned by the Elmira Water Board, and it keeps the river level behind it high enough to allow the water board to withdraw more than 60 percent of the community’s drinking water from the river.